De Luche, also known as nori in Japanese or seaweed in English, is a common snack flavour in Asia. Especially South East Asia.

As someone who loves dill pickle potato chips, I had to try just about chip flavor in Asia to find an alternative that I could enjoy instead. Nori came close, but not close enough.

Don't get my wrong, I am open minded enough to enjoy different flavors, but nori is an acquired taste. Not everyone likes it.

They had seaweed flavor everything: potato chips, sunflower seeds, popcorn, sushi, and everything in between. Heck, you could even buy dried nori crisps. How different is that?

Well I am no hater, but I gotta say: I've attempted to acquire nori taste buds multiple times, but it just hasn't happened yet, and I have a feeling I never will. Such is life though... the world would run out of food reserves very quickly if we all ate the same thing.
Posted by Arnold Ruler at 9:33 PM No comments: 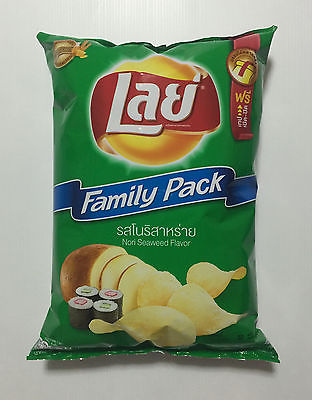